How To Keep Your Conveyor Belt From Mistracking 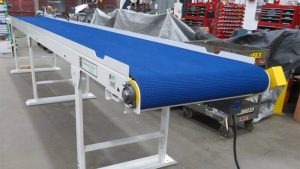 When you have belt conveyors at a full-speed operation working 24/7, mistracking might be the last thing on your mind. However, slight movements or changes that go unnoticed might cause your belt to go off track. Here are a few tricks to keep your conveyor belts from mistracking.

Plenty of places all over the globe have implemented regulations for safety to address the potential problems caused by conveyor belt mistracking. One example is the code 30CFR 75.1731 enacted by MSHA in the United States. It states that “conveyor belts must be properly aligned to prevent the moving belt from rubbing against the structure or components.” Employees that fail to comply with the given regulations will receive fines or probationary punishment.

A complete replacement of conveyors isn’t the ideal option for those operations with a limited budget. Opting for temporary belt fixes is what they turn to. Little do they know that some of these miniscule fixes can worsen the problem. An example is attaching rollers to the conveyor, which may not sometimes be effective since belts would choose to pull instead of push, leading the rollers working against the belt.

One way of adjusting the belt is by using friction. You can skew the roller opposite to that of the direction of the belt. You can also affect its tension profile since belts natural repel themselves from higher tensions by “walking away.” Thus, if there is an increase of strain on one side, it will walk on the opposite side.

Friction And Tension Are Effective

Because of field testing, there have been proven results of friction and tension as the most efficient combination to put the belt back on track in the instance of a misaligned structure. Sometimes equipment manufacturers provide steel return rollers that have edge rollers beside it, causing the roller to skew concerning the belt’s travel. What steers the roller back on the belt is the friction. The only problem with the mentioned method is how the belt edge is hitting the roller with so much force, but without the desired effect. It then puts extreme pressure on the side of the belt.

The next time you have difficulty with fixing mistracking belt conveyors, go for trackers that “tilts and pivots.” It’s a practical solution that will immediately create a quick fix before too much damage is caused.

« 4 Cyber Security Business Ideas Of 2019
Should You Build a Copier Lease Website? »

« 4 Cyber Security Business Ideas Of 2019
Should You Build a Copier Lease Website? »